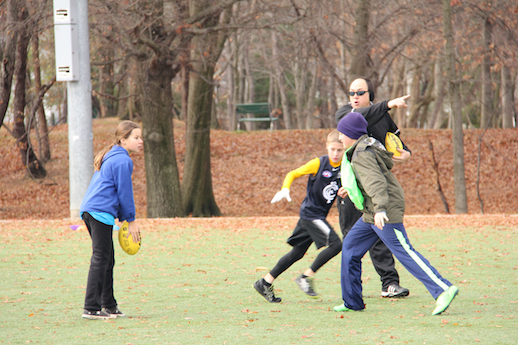 It is that time of year again… No, not that!

It’s the Saturday Morning Footy Winter Camp. YEAH! At a pleasant 37 degrees it was a great day for Footy. Coach Chris did an excellent job of planning and instructing us on proper kicking, handball and other important techniques. As always this is an opportunity to reconnect with the game, reinforce fundamentals, and grow our skills. It is also an important reminder that we need to keep working on those skills for the upcoming summer sessions.  Ok, ok, ok so in the spirit of the season. I give you this…

T’was the night before footy and all through the house,

Coach Chris was checking equipment and running all about.

The Sherrins were all bagged and readied with care,

Mrs. Deena was excited to see who would be there.

Our children were nestled all snug in their beds

While visions of Speckies danced in their heads.

Each of them dreaming how to launch off the bag,

While reaching for the ball over someone’s poor dad. (by the way that is normally me!)

Out on the field there arose such a clatter,

We all went over to see what was the matter.

Coach Steve called, “PLAY ON!” and someone yelled, “have a kick!”

The Sherrin squirted out …how I don’t know

Justin and Ryan went to ground… teammates called “Have a go!”

When what to my wonder eyes should appear,

With a spring in his step, he was lively and quick

He OHHHH and AHHHH over the items that we are raffling off this year to raise money for the Saturday Morning Footy program signed by Nick, (Nick Riewoldt… from the St Kilda Saints… their captain and poster boy for the AFL. Also something from the American rookie Jason Holmes. And YES dear, I bought a bunch of tickets to support our footy club, the program and your favorite team …At least it’s not Collinwood… but I digress.)

More rapid than Eagles the cobbers they came, 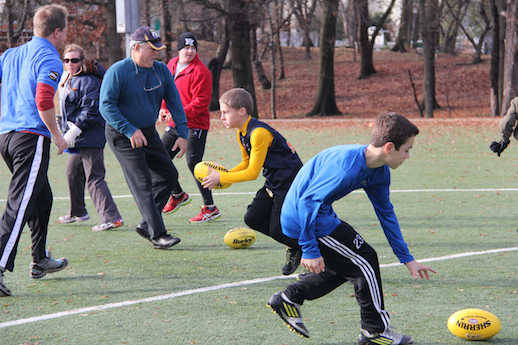 A whistle and a shout as he called them name.

On Solomon, Dave, Ruby and Dick!

To the top of the goal square inside the 50,

C’mon CJ do something nifty.

He backed off the mark and lined up the shot,

He took his time and Alex honored the mark.

Bryan and JJ wrestled for position near the goal line,

As CJ set down the ball and took his sweet time.

He adjusted his socks and retied his shoe,

He took a few deep breathes and thought the shot through.

He tried to remember to follow through on the shot and swing from the hip.

He struck the ball well off the inside of the boot,

It was all well and good but the kick was called moot.

Coach James blew the whistle and called out to all,

CJ pleaded his case, but he knew he was through,

Especially since Coach was not a fan of the Blues.

No one remembers the score, neither goals nor behinds,

I’m really not sure other than we are out of time.

All we know is Footy’s Fun and can’t wait ‘til Spring,

I have to ask Coach Chris if there is something I can bring.

Remember to play hard and listen to the whistle,

Even if it’s a bad call that stings like a thistle.

We all had fun and it was a great sight,

"Happy Hanukkah & Merry Christmas to all, and don’t get in a fight!"

Thanks to everyone who made it and were able to contribute. Not just for the winter clinic but for the Spring and Summer also. It was a great year, even though the weather did not always cooperate. Hope to see you all out there this year and remember that I am still learning this aerial ping pong game.