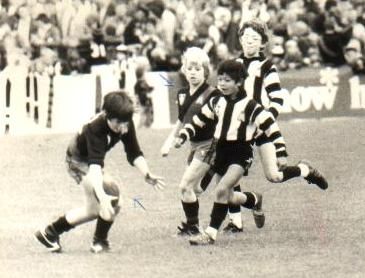 Chris Adams (SMF Coordinator) - Chris grew up in Melbourne Australia and began coaching youth footy in 2006 when he started the Saturday Morning Footy program in Arlington VA.  Chris is a former player and assistant coach of the Baltimore Washington Eagles.  Chris is pictured playing for Essendon at Windy Hill.  He doesn't remember actually getting a touch in the game, but apparently he did.

Rick Bove - Rick has coached gymnastics at all levels and has recently brought is enthusiasm and knowledge to Australian football.

Alex Gershman - A New York transplant to the DC area, Alex is a mad Geelong Cats fan.  Alex, the son of a PE teacher, uses all of skills as a former camp counsler to help the U9s learn how to kick, handball and mark.

CJ Adams - Began with the Saturday Morning Footy program as a six year old in 2006.  He currently plays for the DC Eagles.  CJ is a fifth generation Carlton supporter.