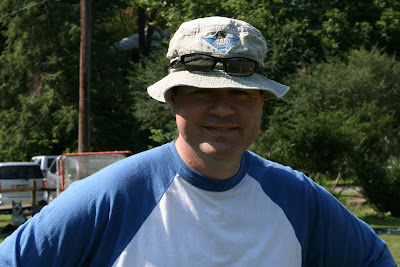 Chris Adams grew up in Melbourne Australia.  He has lived with his wife and son in Arlington VA since 2001.

As a kid, Chris participated in the precursor to Auskick called Vickick, a program run by his best mate's father.  He played footy for East Ringwood Primary School and East Ringwood Football Club.  He also played basketball for Maroondah.  The best coach he ever played for was the young coach of the Kew Colts American football team, Eric Mangini.  Upon moving to the Washington DC area he played and was an assistant coach with the Baltimore Washington Eagles.  Chris has been Secretary and Treasurer of the United States Australian Football League.

Chris is a 4th generation Carlton Blues supporter.  His great-grandfather provided oranges to Carlton for their quarter time break for 30 years.

Chris started Saturday Morning Footy in 2006 and currently coordinates the program.  Chris has many years of experience coaching youth footy, youth soccer and youth basketball.  He has an AFL Level 1 coaching certificate and other coaching certificates from the VYSA and from the Positive Coaching Alliance.