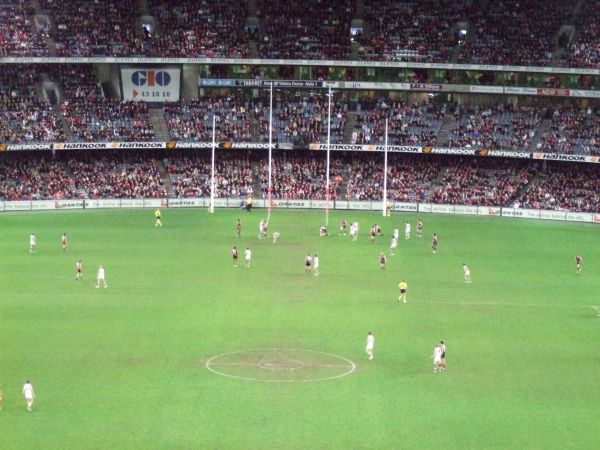 Australian Rules Football or "Footy" is fast, free-flowing game that is the most popular sport in Australia.  The game looks to be hybrid of rugby and soccer with a bit of basketball, hockey, football, lacrosse and volleyball thrown in for good measure.

The game dates to the 1850s in Melbourne Australia, which is before the formation of the Football Association ("soccer") and the Rugby Union in England.

There is no offside, so players can move any where on the field and can pass the ball in any direction.  However, you are not allowed to throw the ball.  To pass, a player may kick (punt) the ball or "hand pass" the ball.  A hand pass is a pass in which the ball is placed on the palm of one hand and punched off with a closed fist of the other hand.

One of the highlights of Australian football is the high mark or "specky".  A mark is term used when a player catches the ball from a kick.  A player who takes a mark is awarded a free kick.  A "specky" is when a player takes an especially spectacular mark, such as the picture on the right when Carlton's Andrew Walker climbed into the air to take this great mark.